Dr. J.W. Barrow, a Campbell Hill native, well-grounded in Southern Illinois values. Dr. Barrow was a teacher prior to going to medical school at Washington University in St. Louis. After medical school, he joined the armed services in World War I and worked at a base hospital in France. There were two types of base hospitals, stationary and general hospitals. Base hospitals often were housed inside pre-war buildings such as seaside hotels. These hospitals grew huge in number and scale throughout the war. The survival rate for wounded soldiers was 4%. I imagine Dr. Barrow learned to prioritize and be nimble in his approach to care. He was known for the characteristics of kindness, compassion and generosity. I’m sure the soldiers and patients he cared for appreciated this.

Dr. Leo Brown joined Dr. Barrow after forming the Doctors Clinic. He graduated from University of Illinois and interned in St. Louis. He also served in World War II as a physician medical officer in the US Navy. He saw many war-time advancements in medicine such as improvements in preventative measures like equipment, flak jackets and helmets; immunizations for cholera, smallpox and typhoid and tetanus; preventative medications for malaria and the initial use of antibiotics like penicillin and streptomycin. Early evacuation of the wounded with earlier surgical treatment became the norm. The holistic approach of body and mind led to recognition of combat fatigue, now known as post-traumatic stress disorder, or PTSD. This was treated with time away from battle, plenty of food and rest resulting in 90% of the soldiers with this returning to fight. All of this led to a survival rate of 50% for those injured. Known as a visionary with unbounding energy and great memory, Dr. Brown’s specialties were in X-ray, radiography and therapy. This role must have led him to an essential place in the care of wounded soldiers. He knew time saved lives and he had to be both quick and accurate in his role interpreting images.

Dr. John Lewis The son of a physician, he started a surgical practice in 1938. He attended school in Arkansas and served as a surgeon in the public health service and in the Navy during WW2. Known as a fine surgeon, he would have developed a vast array of skills from his service in the war. Unfortunately, the biggest advancements in trauma care often come out of wars. He was recruited to join Drs. Barrow and Brown in their group. He brought with him his business skills having managed his own successful practice. Dr. Lewis is credited with founding of The Doctors Hospital that became Memorial Hospital of Carbondale. Doctor’s Hospital planning began in 1946 and opened in July of 1950. These guys knew how to build a team and get things done!

Dr. John B Taylor began his practice in 1940 after graduating from the University of Illinois Medical School. He served in the Navy Medical Corps and his practice was in internal medicine. He was recruited by Dr. Brown to join the Carbondale Clinic. The fact that he had a reputation as a brilliant man and diagnostician was a great addition to the practice. He succeeded Dr Brown as the president of Southern Illinois Hospital corporation. Dr. Taylor was instrumental in development of medicine in Southern Illinois through many growing pains both professionally and politically. He’s remembered as someone with a special ability to keep the peace. What makes a peacemaker? First, they are special people who are at peace with themselves— not agitated, ill-tempered, or in turmoil and therefore not abrasive in any way. Second, they work hard to settle quarrels, not to start them; they’re accepting, tolerant and find no pleasure in being negative. 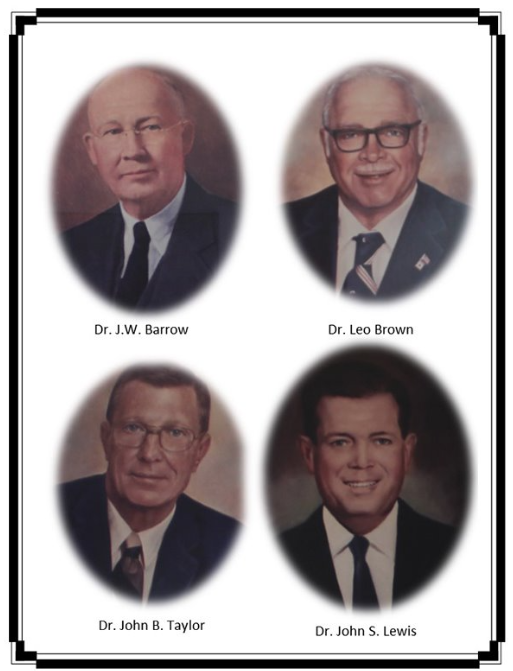 Our response to the pandemic is rooted in the same principles that came before us to provide, grow and thrive healthcare in this area. I saw these same values reflected in our response and activities necessary during the Covid pandemic.

Our actions were rooted in compassion, vision, energy, high level of skill and tolerance. Our founders' common values of service to country and individuals came through as we held the hands of the dying, comforted sick patients and family members and created a safe environment for staff and visitors. We embraced each other in support of the work done that was so draining on our energy. We never gave up. When we needed it, the community and patients gave back to us their good will, positive thoughts and well-wishes. We reached out to our community and partnered in fighting the Covid virus to build the necessary team just as our founders did. We’ve truly acted in the memory and honor of our four founders in the face of a pandemic.